Maine artist Morbideus Wolfgang Goodell has been signed to create the cover art and interior illustrations for Where Spiders Fear to Spin, the upcoming novella by Peter N. Dudar, a Bram Stoker-nominated author, due out from Books & Boos Press early this summer. 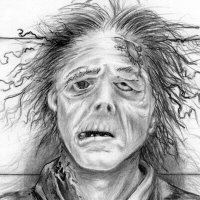 A past illustration created by Morbideus Wolfgang Goodell.

Goodell describes his style of art as “visual requiem.” His designs are well known throughout the horror community. His most recent works include the cover illustration and design for Dark Art by Tim Waggoner (2014) and contributing to the interior art for Mister October, Volume I: An Anthology in Memory of Rick Hautala (2013).

“Morbideus Goodell’s art is haunting and evocative. He was our top choice to illustrate this book,” says Stacey Harris, managing editor for Books & Boos Press. “We’re so happy to have him on board for this project, and excited to be able to work with him.”

Goodell previously illustrated the cover of another Dudar novella, The Angel of Death (2013). His art is on display at http://www.facebook.com/morbideuswgoodell.

Where Spiders Fear to Spin will debut at Anthocon in Portsmouth, NH on June 5.

WHAT IF THE PERSON YOU WRONGED IN LIFE WAS WAITING ON THE OTHER SIDE, JUST BEYOND THE COBWEBBED VEIL OF DEATH, TO DRAG YOU TO HELL?

Books & Boos Press is pleased to announce that we will be publishing Where Spiders Fear to Spin, a novella by Bram Stoker Award-nominated author Peter N. Dudar, in 2015. As a bonus, Dudar’s short story “Peripheral Vision” will be included with the novella.

Where Spiders Fear to Spin is a dark tale of mother and daughter, caught up in a web of resentment over past wrongdoings that infects every aspect of their current lives. While these two women struggle to deal with the past and each other, a vengeful ghost comes back into their lives to set right what they cannot—and it’s not pretty. Where Spiders Fear to Spin promises to be a terrifying and compelling read.

Dudar is the author of numerous novels, novellas, and short stories, including A Requiem for Dead Flies (nominated for a Stoker in 2013), Dolly & Other Stories, and The Angel of Death. He also pens a film review column titled Me & Lil’ Stevie for cinemaknifefight.com. A resident of Lisbon Falls, Maine, Dudar is donating his proceeds for this book to the Lisbon Community School PTO.