We have released the final installment of the Terror Project series, THREE A.M. WAKE-UP CALL, this past Tuesday (June 5).

In coordination with our new release, we’re putting the first two books in the Terror Project on sale: 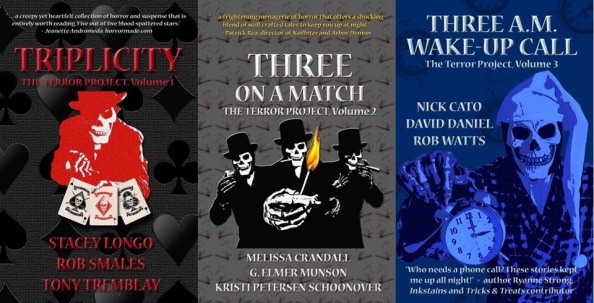 TRIPLICITY will also be coming out on audiobook any day now (I received an email from ACX on Wednesday saying it was “heading to retail,” but no indication of when it will be available). Tony and Rob, I’ll update you when it’s available.

THREE ON A MATCH is heading into audio production now, with an anticipated October release date for the audiobook. Then our narrator will move on to the final book.

Books & Boos Press has placed many of its Kindle titles on sale until Dec. 31. Many different titles are now only .99 cents on Amazon.

My Mom, MS, and a Sixth Grade Mess by Stacey Longo

Echoes of Darkness by Rob Smales

My Mom Has MS by Stacey Longo

Where Spiders Fear to Spin by Peter N. Dudar